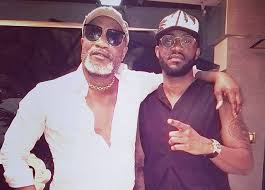 Fally Ipupa N'simba, known by his stage name Fally Ipupa, is a Congolese singer-songwriter, dancer, philanthropist, guitarist and producer. From 1999 until 2006, he was a member of Quartier Latin International, the music band formed in 1986 by Koffi Olomidé.

Antoine Christophe Agbepa Mumba, known professionally as Koffi Olomidé, is a Congolese Soukus singer, dancer, producer, and composer. He has had several gold records in his career. He is the founder of the Quartier Latin International orchestra with many notable artists, including Fally Ipupa and Ferré Gola.